This week I'm going to take a closer look at face offs as a fantasy stat.  I joined my first league this year using face offs, I tried to go with an open mind but I don't think I'll ever join a league that uses the stat again.  I understand how important winning a face off is to real hockey (it's no coincidence Washington, Chicago and Philly lead the league in FOW) but I think it might be the dumbest fantasy stat to use in your league.

Below are four reasons why I think face offs are something you shouldn't be using in any fantasy league... ever.  If you disagree I would love to hear it in the comments.  Like I said, I've only been using face offs for a short time so maybe I'm missing something.

All of the analysis below completely ignores defensemen for obvious reasons.  Only one d-man (Derek Morris) currently has more than one faceoff win. All statistics are up to games played on Dec 17th, 2010

Follow the jump for a closer look at face offs...

Reason #1 - The difference between good and bad is pretty insignificant.

There are a few players who seem to stand out from the crowd....

... and some that really struggle to win face offs

With two each on the list it's no surprise that the Rangers and Hurricanes are the bottom two in the league in faceoff winning %. 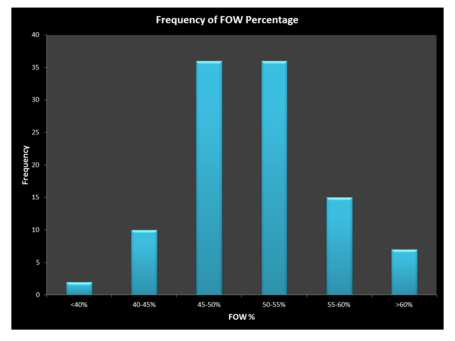 69% of the players with >100 FOW are between 45% and 55%. Why are you going to overpay for one of the few specialists in FO's when the difference between good and bad is just a few percentage points?  When you take the natural variation that happens with data (i.e. luck) and injuries into consideration there really isn't much separation between players.

The variable which has the biggest impact on FOW's is (not surprisingly) how many face offs you take.  Let's look at the...

Every single one of the players above is on the Top 20 list for face off's taken.

There is a big difference between the number of FO's each team in the league gets.  I'm not sure why (maybe penalties or goalie tendancies) but some teams have more face offs then others.  Three teams currently have more than 2,000 face offs, four are under 1,700.  That's a big difference.  Since it's pretty close to a coin flip, face off wins appear to be more team specific than I would have originally thought.  Check out the graph below of the 30 NHL team and the correlation between face off's taken and won: 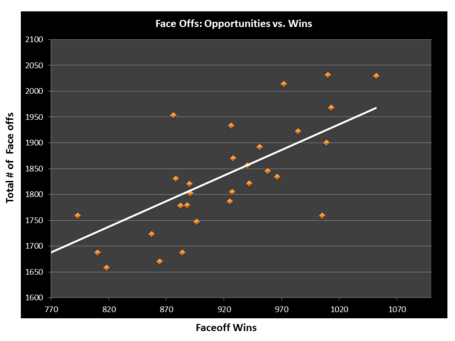 The big outlier on the plot (high # of wins and relatively low face offs) is the Canucks.  Who knew?

Imagine you are an owner and you draft your two centers... let's say Evgeni Malkin and Alexander Steen (your only source of faceoff wins) and the next thing you know they get moved to the wing.  Bye-bye faceoffs.

Both Malkin and Steen only qualify as centers in Yahoo! leagues so you couldn't even trade them to another team or playing them on your wing.  Malkin has only 38 FOW's this year.  He's not a very strong face off artist (~40%) but he's been playing a bit more on the wing this year which limits his chances as well.  Steen has just 14 FOW's this year as he's has been playing a ton on the wing... but Yahoo! doesn't seem to care.

Malkin and Steen are the two most extreme examples, but this kind of thing happens to a lot of players even if it's just for a few games.

However, if you do use FO's you can use this to your advantage.  Here are some players that have won a good chunk of face off's (>100) but qualify as wingers in Yahoo! leagues.  Load up on these guys, stick 'em on the wing, and you'll guarantee yourself the FOW category:

Your success or failure in FO's is going to depend on who Yahoo! calls a center and who they don't.  I really don't want my season depending on Yahoo!'s mysterious positional eligibility rules, do you?

Reason #4 - Face off data is not readily available

Putting this together I quickly found out how hard it is to find good FO data.  You can find FO% data at NHL.com but I couldn't find anywhere with game to game face off data.  I don't really want to go hunting for info when I'm doing my analysis of who to draft, deal or dump.

I would imagine the one big argument for FO's is that it makes it more like the real NHL.  I think that the impact it makes to fantasy team is much lower than what it makes to an NHL team. The fantasy teams that are leading FOW seem to be doing it in a bit of a fluke.  At least that's been my experience.

Way too many issues, not enough benefits.  So don't do it.  Don't select anything to do with face offs as your stat categories next year.  You won't get me joining your league if you do.