This week I'll be taking a closer look at shooting percentage.  If you're a loyal reader of FHS you'll know that Cam is a big fan of the stat and often uses it in the Dosage.  You might have also seen this story by Scott Cullen at TSN.  Here's a quote:

One of the premises for the Stamkos article was that it was highly unlikely that he was going to continue scoring on 26.4% of his shots; it's just so good that it's hard enough to maintain for 19 games, let alone for an entire season.

I know that a shooting percentage of 26.4% is crazy (it's dropped down to 21% since that article was written) but I didn't really understand how crazy.  I wanted to know.  Cullen goes on to list some other players that might have unsustainable shooting percentages, which was nice of him, but what about the players who are playing below their career numbers?  I wanted to know that too.  So I pulled the numbers and had a look.

All statistics are for games up to Dec 7th and are from the amazing Hockey-Reference.com

First we'll start with the current league leaders in S%.  Because we're talking about percentages I limited the results to players with at least 10 games played and 20 shots:

Will the Habs will be able to survive once Halpern and Darche come back to earth?  Here are some others of note near the top: Sidney Crosby, Alex Tanguay, Brandon Dubinsky, Steve Ott, Johan Franzen, Rene Bourque, Raffi Torres, Dan Cleary and Clarke MacArthur.

Follow the jump for more leaderboards, pretty graphs a closer look at Crosby, Ovie and others.

Of course we'll need to look at the bottom of the list as well.  I eliminated a bunch of useless fantasy guys to make the list more interesting (click here for the whole list).

Those top 10 lists are a bit of fun but what we really want to know is who is performing above or below their career shooting percentage.  I took all active players and got rid of anyone with <10 games this year, <150 career games or  <0.4 ppg this season and had a look at the difference between their career numbers and what they are putting up this season.

I have to agree with that list.  I can't see any of those players keeping up their 2010 goal scoring pace.  Is it time to sell high on guys like Dubinsky, Giroux, and Lucic?

For every lucky player there is an unlucky one...

Alot of guys on that list are ones that I wouldn't have been too keen to trade for.  Now I'm thinking maybe it's time to buy low on guys like Hudler, Kovalchuk, Pominville, Ribeiro, Malone and Elias.  Hmmm.

Next, I wanted to get a better understanding of how shooting percentages are spread out. When should I be thinking a player is off the planet like Stamkos was earlier this season?

First we'll look at the spread of shooting percentages in 2010. (click for a larger image) 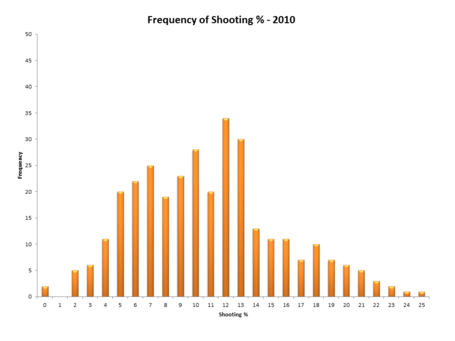 Things are clustered pretty well from 5-15%.  But when you look at the distribution of career shooting percentages many of the outliers disappear. 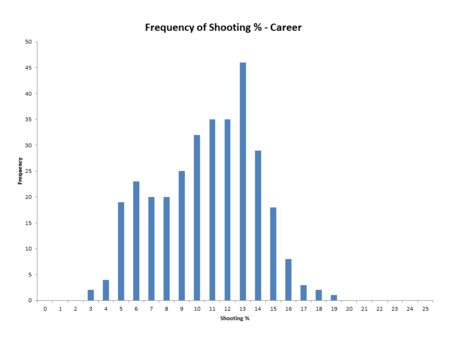 The two peaks (~6% and 13%) are due to defensemen and forwards.  D-men usually have a lower shooting percentage than forwards because their shots are normally from much further away.

But the moral of the story is don't expect a player who is scoring less than 5% of the time or more than 20% of the time to continue at that pace.

I picked nine semi-random players (all with ~400 games played) and had a look at how their S% looked year by year to get a better idea of the variation of S%.
(Click for a larger version) 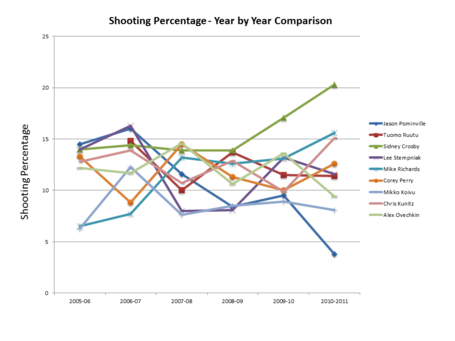 It's a bit of a mess but as you can see there is lots of year to year variability but not normally more than 5% either way (the exception being Crosby).  Notice how none of these players have become more accurate as they aged (click here for more on that).   I'm curious if these nine are representative of all players or not.  I'm planning on looking into this in more depth in a future Stat O' The Week.

Shooting percentage has some problems.  Since it's a percentage the leaderboard can look a little stupid (long live Nodl).  Even if you limit the number of games played you'll have a guy like Tom Poti who has scored on two of his eight shots still up at the top.

Remember expect a player to score on 5%-16% of his shots.  You'll also see year to year differences but they are normally ~5% so don't get bent out of shape if somebody's S% is slightly up or down.

From a fantasy standpoint it's a stat you should definitely pay attention to, particularly when you're evaluating a player over a short time period.  Were they lucky or good?  S% is one of the best stats for helping to answer that question.