Stat O' The Week - Is Getting Traded a Good Thing?

Share All sharing options for: Stat O' The Week - Is Getting Traded a Good Thing?

This article by Rotowire/Yahoo! writer Janet Eagleson got Cam and a few others a little worked up this week.  The bizarre statement "most NHL trades hurt - not help - your fantasy team" left me scratching my head as well.  I was hoping Eagleson would back up her claims but there really was no meat on those bones.

So I figured it was time for SotW to come to the rescue.  I'm pretty comfortable in saying that statement is flat out wrong.  But I really don't have a good understanding of how wrong it is.  That's my goal today.

I don't want to pick on Eagleson, I think she's a pretty sharp fantasy writer,she makes the odd comment now and again but overall she knows her stuff.

I used Wikipedia's listings of NHL transactions (here's 2009-10 if you were curious) and since I had to compile the data by hand there could be a few mistakes here and there.  Check the bottom of the post for my process and the data I used.

There were 95 skaters who fit my criteria over the last five years.  I looked at the ppg's they put up on their old and new team in the season they were traded.  The average percentage increase was 44%.  That's huge.

So only 30 out of 95 players played at a worse pace after their respective trades and very few of them experienced a major drop off.  In histogram form: 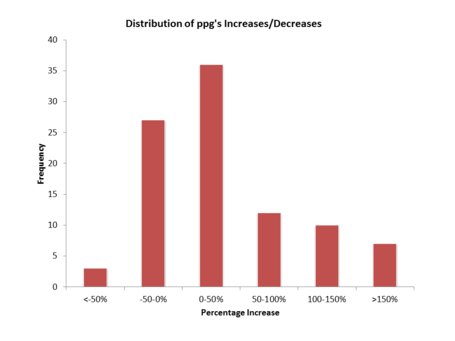 It's pretty obvious that what most thought would be correct... is correct.  So I'm not sure where Eagleson was coming with her statements.  1 out of every 4 player traded has a significant drop off but it's definitely not the norm.

We probably don't need much more analysis but I it took me forever to get all that data together and I like graphs... so here's another one.  Here we see our 95 pieces of data and a comparison between the ppg's on the OLD and NEW team.  The correlation is not as high as I thought it would be (r2 = 24.4%).  All values above the blue line are players who slowed their pace... below the line are players that turned it around. 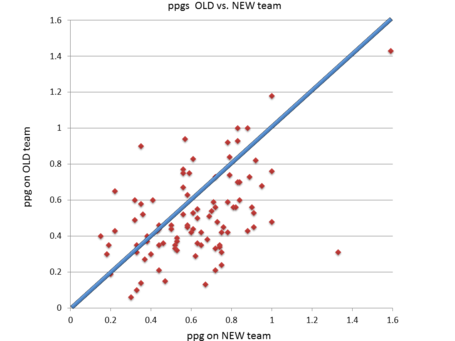 If you're like me you might be a bit curious who has been the best and worst after they were traded.  Here you go.

I didn't forget about the tenders...

Only six 'important' goalies changed teams as far as I can tell (which surprised me), only one of those six experienced a drop in their sv% and it was a pretty small drop at that.

CONCLUSIONS
- Over the last five years... trades help 62% of the time, have no impact 15% of the time and hurt 23% of the time. So if your player gets traded, it's likely a good thing.
- 18% of the time the traded player more than doubled their ppg & only 3% saw their ppg drop by half or more.  So if your your player gets traded, it could be a REALLY good thing.
- We saw the same trend with the goalies in a very small sample size.
- We need more trading in the NHL... only 95 significant players traded?  Not good enough.

Click for the data I used... let me know of any mistakes: Trade History Data

- I only looked at trades from November till the trade deadline from each year
- I only looked at players with at least 15 games for both their old team and their new team
- I only collected data for fantasy relevant players... that's 101 pieces of data in total