I'll say this off the top. I hate GWG as a fantasy stat. I've been part of several leagues that include the stat and I essentially just draft as if we're not using the stat at all. I hate it because scoring GWG's is luck and not skill.

I've always just assumed this fact, so let's take a closer look to see if my assumptions are correct.

Before we get into the analysis let's take a look at the leaderboard so far this season:

Going forward... do you think any of these guys will have more GWG's than Alexander Semin, Dustin Brown or Brandon Dubinsky (who all only have one GWG even though they've scored >15)? I don't think so.

More after the jump...

The first point we need to make is that you would expect (on average) that the more you score the more game winners you'll get. This makes sense for two reasons. 1) The more goals you have the more likely you'll luck into that goal being the game winner. 2) In close games the players that score the most will be on the ice most often.

The graph below shows a pretty strong correlation (r2=64%) between GWG and goals scored, as expected: 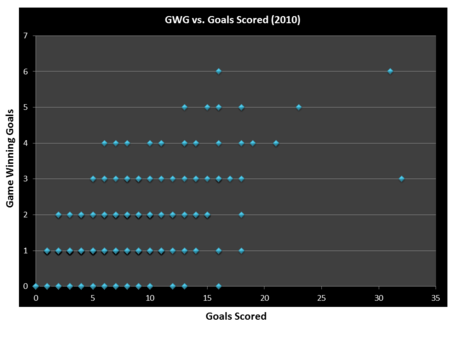 So the big question I wanted to see is if there is any correlation from season to season. Check out this scatterplot comparing GWG's for the last two seasons (only players with >10 goals this season and >20 last year were included) 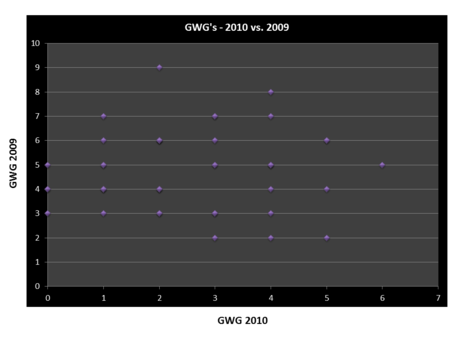 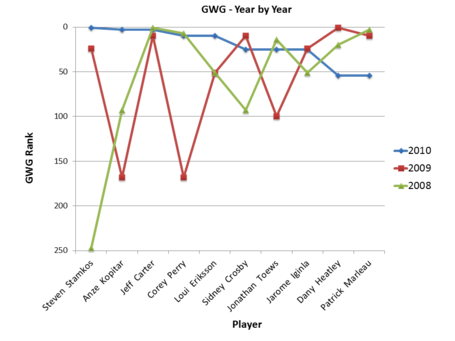 Some of that variability should be expected (like Stamkos' 2008 rank) but then you look at a guy like Anze Kopitar who has ranks of 3, 168 and 93. Fantasy hockey is tough enough without having to predict something like GWG.

If you're a decision maker in your league, I would do two things. First, get everybody to start calling you 'The Decider'. Second, get rid of GWG. It's a dumb category... based on luck. You might as well start betting on coin flips.

However, if you aren't The Decider then you can still take advantage. I joined this league last year. The categories were G, A, PPG, SHG and GWG. Seriously. Pretty dumb eh? Anyway, I quickly realized that goal scorers were at a premium and loaded up with scorers like Heatley, Iginla, and Stamkos (unfortunately I got autodrafted with Ray Emery and Chris Mason... and finished the season in 4th).

The moral of the story is if your league counts GWG just realize that goals are now twice as important so bump up scorers on your draft sheets.

Thoughts? Comments? Does anybody enjoy GWG?