Share All sharing options for: ESPN vs. Yahoo! - Ownership Percentages

The idea for this post began when I started reading Dio's Free Agent and Trade Target Posts this year. He uses ESPN ownership percentages and I'm an owner in Yahoo! leagues. The numbers of the two sites seemed to be very different so I thought I needed to take a closer look.

Both have very large populations so we should be seeing pretty similar ownership of players, right? Well ... no. Why? I have no idea. If anybody has any suggestions on why Mikhail Grabovski is owned in 30% more leagues in Yahoo! or Shawn Horcoff is owned in 80% more often in ESPN leagues I'd love to hear it in the comments.

- On average players in ESPN leagues are owned an average of 9% more than in Yahoo! leagues. Maybe the ESPN default leagues have larger roster sizes? Larger leagues use ESPN more often? Not sure.

- ESPN has 124 players who have a 100% ownership. Yahoo! has just seven. The breakdown is below in chart form. In ESPN leagues, 144 players are owned in more than 90% of leagues but it drops down dramatically to just eight between 80 % and 90%. Yahoo! has a similar distribution to ESPN (as you would expect) but much less dramatic. 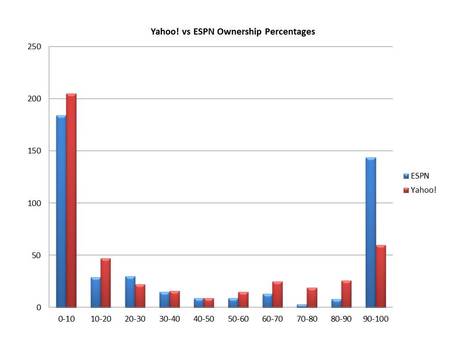 More after the jump...

A lot of big ownership numbers on guys I wouldn't expect. Ryan McDonagh is owned in 100% of leagues? What are you ESPN owners smoking? ESPN uses ATOI as one of it's default categories (I believe). This could be a reason for some of the differences but the numbers still seem very bizarre to me.

So what can you take away from this? Ummm... how about ownership numbers aren't as useful as you might have thought. Use that to your advantage when taking trade. "McDonagh is owned in 100% ownership... he's a beast, you definitely want him)". This is particularly true in ESPN leagues were a huge portion of the players are owned in 100% of leagues.

These results are very surprising to me. I did expect the ESPN numbers to be higher but I didn't realize the extent. I was also expecting the players to at least be similarly ranked. If Yahoo! players are a bit wary of Shawn Horcoff wouldn't the ESPN players also be? I don't get it.

I feel like I'm missing something very obvious here explaining the differences... but I've got nothing. Any ideas?