We choose a box method for our playoff pool and staked a $250 prize for 1st hoping we could get a whole whack of people playing some fantasy hockey... looked like it worked.  Almost 500 people signed up at HockeyDraft.ca and picked one out of five players in 21 different boxes.

I thought it might be interesting to have a look at the breakdown of each box. (The 'J' and 'C' show you who Cam and I picked... making it easier to make fun of us in the comments).

If you can't remember who you picked, you can find your entry by visiting the hockeydraft.ca and clicking 'Team Rosters'.

Come back to FHS after each round as we'll have a look at who is doing the best per box and who we wished we picked.  We'll also see if we have any 'perfect' entries.

The breakdowns after the jump.... 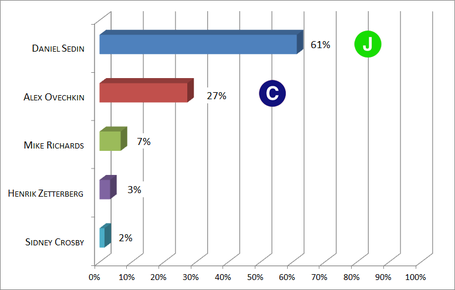 Sidney Crosby was one of three players who appeared on the fewest number of entries with just 7 (Brian Gionta and Ryan Callahan were the others).  Glad to see seven people out there are willing to roll the dice on Crosby's concussion issues.  So far Alex Ovechkin and Daniel Sedin are looking like quality picks. 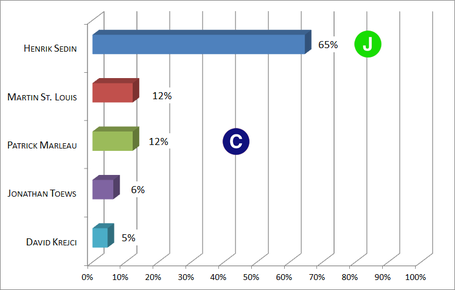 Henrik Sedin appeared on the most number of entries (296) and so far it looks like the majority of the entrants made the right decision. 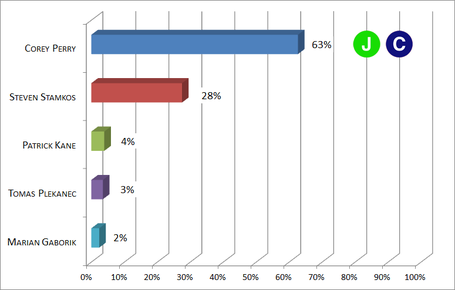 I was surprised Patrick Kane didn't get more votes but it's pretty hard to look past the mental end of the season Corey Perry had. 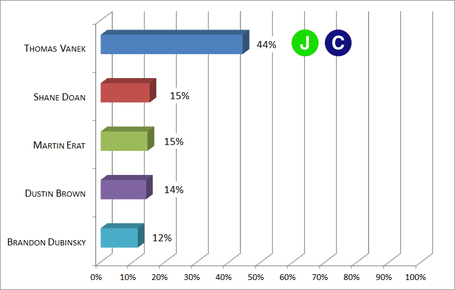 Cam and I only agreed three times... this being one of them.  All five guys have an up-hill climb to get past the first round but Thomas Vanek and Martin Erat are looking like the best out of the bunch so far. 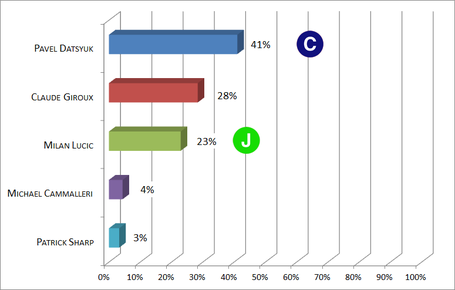 My first major mistake.  I was hoping for a big charge from the Bruins this year... not looking good so far.  Pavel Datsyuk looks like the best pick here.  I am the worst Red Wing fan ever. 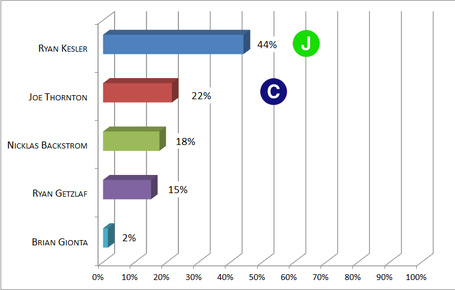 This was one of the boxes I really fretted over.  Ryan Kesler, Joe Thornton, Nicklas Backstrom and Ryan Getzlaf are all quality picks.  Much too early to call this one.  Brian Gionta really doesn't belong with these guys. 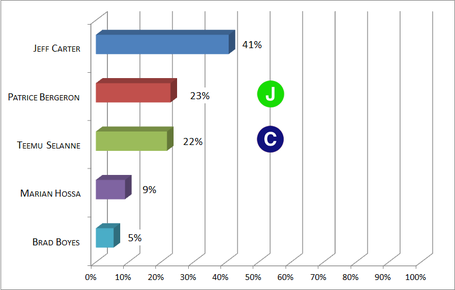 With the Blackhawks and Bruins struggling it's looking like either Jeff Carter or Teemu Selanne will end up being the leader in this box. 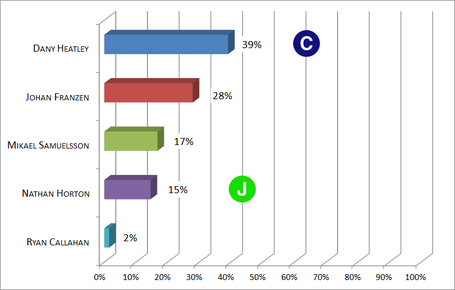 Dany Heatley has the most talent, Johan Franzen has the most playoff success, Mikael Samuelsson is on the best team... so of course I go with the guy whose team loses the first two at home. 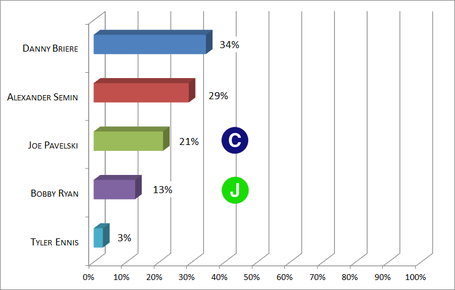 I really wanted to take Alexander Semin in this box but I had to stick with my Ducks as I have them going to the final four.  Cam did the same thing with Little Joe Pavelski as he tabbed the Sharks to win the cup. 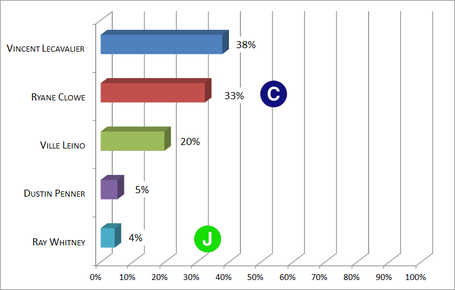 Surprised that Vincent Lecavalier is leading this one.  The Lightning will have a tough time getting by Pittsburgh and Vinny hasn't been that great since 2007-08.  If I could re-pick here I'd be going with Ryane Clowe or Ville Leino. 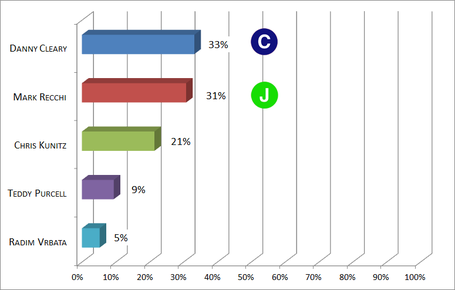 A tough box as none of these guys are very good.  Danny Cleary is looking like he'll end up on top. 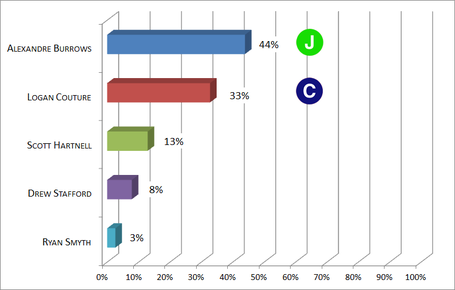 I almost went with Drew Stafford in this box but the power of the Sedin's (Alexandre Burrows' linemates) is too much to ignore.  Cam continued his man crush on Logan Couture into the playoffs. 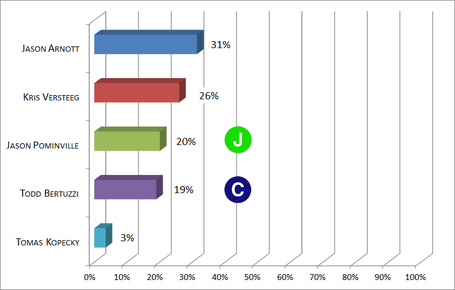 One of the closest showdowns in the pool.  You could make a case for any of Jason Arnott, Jason Pominville or Todd Bertuzzi.  You really have to be a big Flyers fan to pick Kris Versteeg though... he played at just a .41 ppg pace once he joined the Flyers. 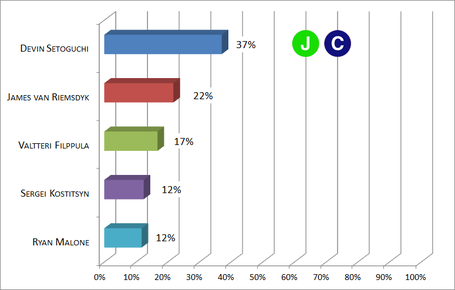 One of only three boxes featuring a Nashville Predator.  Unfortunately no Mike Fisher, who is having a huge playoffs so far.  Too early to call on this one.  I still like Devin Setoguchi long term but James van Reimsdyk has been looking good so far. 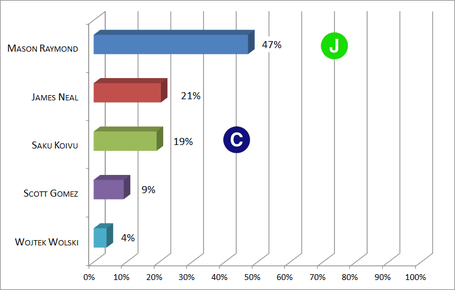 Mason Raymond must be trading off his 'How I Met Your Mother' fame because it just doesn't feel right with him leading this category after only 39 point season this year.  Many of you, like me, are hoping for a deep Canuck run plus a bit of luck for Mason. 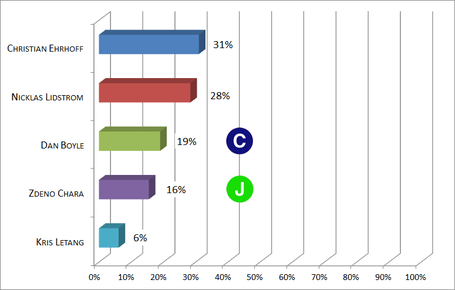 On to the d-men.  Christian Ehrhoff and Nicklas Lidstrom are probably the safest picks but Dan Boyle and the Sharks could go deep as well.  I thought the same about Zdeno Chara and that's not working out at all. 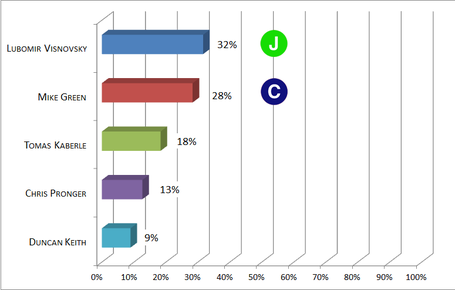 I thought Lubomir Visnovsky was the easy choice here but things are split pretty evenly.  Mike Green is just back from injury, Tomas Kaberle only had 9 points in 24 games with the Bruins and Chris Pronger has yet to play a playoff game. 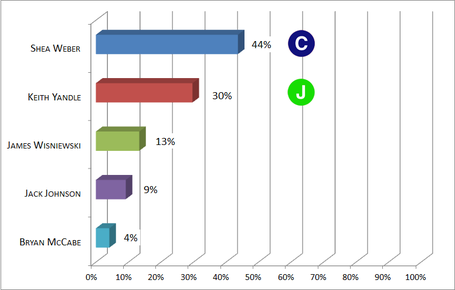 It's still early days but Shea Weber and James Wisniewski are looking like the guys to own in this box. 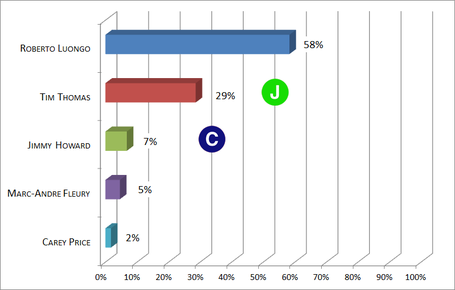 On to the goalies.  Only eight owners picked Carey Price... all he's done so far is win them two games with a shutout.  I'd still rather own Roberto Luongo in the long run but Price is looking good so far. 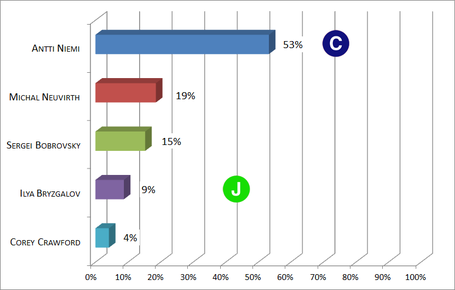 Antti Niemi gets all the attention here.  I'm guessing many people were scared away by the short leash Michal Neuvirth is likely to have with the Capitals.  I picked Ilya Bryzgalov.  I'm an idiot. 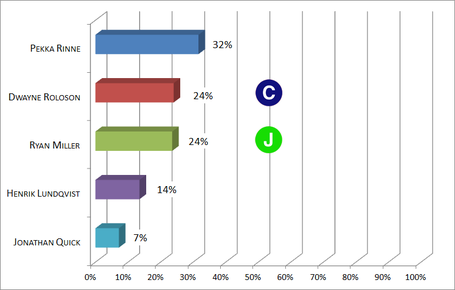 The final box was an easy one for me I have the Sabres going to the semi's so Ryan Miller is my man.  Pekka Rinne is looking like a solid pick so far as well.

Keep coming back to FHS.  After each round, we'll re-do this analysis and see who you should have picked in each box and see if he have any 'perfect' entries.

Any questions or comments let us know in the comments section below...