Many games to cover from the NHL last night with a total of 12 being played on the pond. So as I sit here eating left over turkey sammy's, let's get you all (or most) of the story lines from a busy Tuesday night.

Darcy Kuemper was chased from the net after only stopping 4-7. Josh Harding came in and stopped all 6 shots he faced. Kuemper will be sent back down but he didn't do himself any favors here in gaining the confidence of the coaching staff.

Toronto was badly out shot in this game 37 - 13 but still managed the win. And with that, James Reimer is back in the drivers seat.

The only thing to note from this game for the Wild is the ice time for Ryan Suter which totalled just over 30 minutes! Dany Heatley finished with just over 15 minutes of ice time and from what I read, couldn't keep up with the play all game.

Ryan Miller defeated the New York Islanders 4-3 in a shootout for Buffalo's first win of the season. Miller had another great game stopping 41-44. In 5GP now, he has a 2.39GAA and a .939SV%. Pretty decent numbers for a team that can't score and just collected their first W.

Despite this win, there are rumours out there that Darcy Regier is on his way out as the GM. This shouldn't come as a surprise to anyone but in the fantasy world, it's worth taking note of. Teams typically play well for the next few games after replacing a GM or Coach, which is welcoming news when/if it does happen for any of you needing a boost in your leagues.

Tyler Myers registered his first point of the year in 8GP with 1A. He also had the most PP TOI with 4:25.

Cal Clutterbuck still pointless in his 3rd game back. But I mention him because he registered 8 Hits for the night on just 10 minutes of ice time. In a league that counts hits?

Michael Grabner also failed to register a point but he did muster 8 SOG on over 17 minutes of ice time.

Henrik Sedin with 2A and a +2 rating as he helped power the Canucks to a 3-2 win over the Flyers. A memorable night for Hank as well as he registered his 800th career point in this one.

Chris Higgins scored his first of the year on his 25th shot in 7GP and also collected 1A. Add to that 2PIM, 3SOG and 2 Hits and that's exactly the stats you were hoping for from him...while he sits on your bench...

Ryan Kesler with 2G, +1, 6SOG and 2 BS on over 22 minutes of ice time. He was the first star of the game and it's funny how a road trip can help break players from a funk, isn't it? Get them away from home cooking, local media and a chance to bond with their teammates and voila! By the way, Vancouver just started a 7 game road trip.

Tye McGinn with 2G, 4SOG and 3 Hits. He now has 3G, 2PIM, 7SOG and 4 Hits in 2GP since being called up. It also helps that he was playing on L1 with Claude Giroux but then again, McGinn is now the leading scorer for Philly. What's wrong in Philly?

By the way, while watching the Vancouver/Philly game, Flyers GM Paul Holmgren announced that Chris Pronger will never play another game in the NHL. What a career Pronger had, which I won't get into here but for all you trivia buffs, here's one for you. With Pronger's unofficial retirement, that leaves just one player still active in today's NHL that used to play for the Hartford Whalers. Any guesses?

Nicklas Grossmann, for those that count hits and blocks finished the night with 1A, 2PIM, 3SOG, 4 Hits and 3BS.

Jason LaBarbera with the start in net for the Edmonton Oilers and they lost 3-2 to the Pittsburgh Penguins. Let the speculation begin on who the Oilers go after to be their new #1 guy between the pipes. Alright, speculation started awhile ago but in my opinion, they should be looking at either Brian Elliott or Ryan Miller. I think both can be had relatively cheap and would be a great stop gap for the near future.

Nail Yakupov was back for this one but was held pointless on over 17 minutes of ice time. Over 2 minutes on the PP but finished -1, with 1SOG and 1BS. That's how you get back at the coach for benching you..

Sidney Crosby with 3A, 5SOG, 1Hit and 2BS. That is your league leader now with 12 points in just 6GP. He has registered at least a point in every game so far this season while registering 25 shots on net. Don't worry, the points will start coming.

Evgeni Malkin with 1G here and he is now on a 4 game point streak with 2G, 3A and 14SOG over that span.

Patrick Sharp scored his first of the season here and finished with 4SOG with just over 16 minutes of ice time.

Tuomo Ruutu had 1A to go with 3SOG, 6 Hits and 3BS. A good sign for Ruutu owners.

For those in leagues that count FO%, keep an eye on Manny Malhotra. Remember him? He refuses to quit after a scary eye accident a couple of years back. Manny is currently down with the Carolina farm team on a tryout basis. He'll be given 5-7 games and if signed, he was one of the best when it came to the face off circle. All the best Manny. I hope it works out.

Jake Muzzin must've loved watching this game. He was assigned to the press box for the 4th straight game here and watched as his Kings were beat 5-1 by the Tampa Bay Lightning. You'll see a quote from Darryl Sutter below on the situation. UPDATE: Just as I was about to publish this, word has come out that Muzzin is now actually day to day with a knee injury. The first game was a healthy scratch but the rest due to this injury.

Slava Voynov scored his first of the season and added 4SOG and 1 Hit. His buy low window is going to start closing very soon.

Martin St. Louis with 2G and 1A and a +3 rating with 4SOG. You know what you are getting with this ageless wonder.

Ryan Malone with 1G and 1A, +3, 2PIM 3SOG, 3 Hits and 1 BS. Provided he can stay healthy, he should be a solid contributor in all categories this season.

Teddy Purcell now has points in 5 of 6GP adding 1G and 1A here. He now has 4G and 4A to start the year while averaging under 14 minutes of ice time.

Daniel Alfredsson with his first goal of the year as Detroit beat Columbus 2-1.

Jonas Gustavsson with a huge game stopping 36-37 shots fired his way. He is now 2-0 to start the year.

Cam Atkinson had the lone goal for the Blue Jackets and he also had 6SOG.

In the battle between 2 of the remaining 3 undefeated teams, the San Jose Sharks showed their dominance once again with a 6-2 shellacking of the Blues, chasing Jaroslav Halak from the net in the process who stopped 22-26. Brian Elliott came on in relief stopping 11-13 but is that enough to finally get a start next game? If so, look for Elliott to do all he can to prove that he should get more starts going forward. Coach Hitch is known for playing the hot hand so let's see what Elliott does with the opportunity, when he is finally given one.

Joe Thornton lead the way with 1G and 3A followed by Patrick Marleau with 1G and 2A on 6SOG.

The sharks keep on rolling...

Craig Smith, Mike Fisher and Shea Weber each had 1G and 1A en route to a 4-3 victory over the Florida Panthers.

Jonathan Huberdeau had 1G and now has 3G and 1A in 7GP.

Max Pacioretty left this game with a LBI and only played over 4 minutes in this one.

Evander Kane didn't hit the scoresheet but helped out poolies in other categories by adding 6PIM, 4SOG and 3 Hits.

Patrick Roy is now tied with Mario Tremblay for wins out of the gate for a rookie coach with a 6-0 start. Like I said last week, damn the Avs look good. They now stand alone with the San Jose Sharks as the only undefeated teams in the NHL.

Semyon Varlamov stopped 39-41 and was named first star of the game. As per @TheGoalieGuild, that gives Varly four 1st star honors and one 3rd star honor in 5GP to start the year. Unreal. A great Varly quote below...

Matt Duchene with 2G to give him 5 goals now in 6GP and 7pts.

Alex Goligoski held off the scoresheet again so thats no points in 5GP to start the year. He was a -2 on the night with over 21 minutes of ice team including just under 3 minutes of PP time. Buy low?

Craig Anderson stopped 34-37 to best the Phoenix Coyotes 4-3 in OT. Mike Smith was on the losing end stopping 28-32 but added 2PIM for what it's worth.

Jason Spezza with the hat trick here on 5SOG. He now has 4G and 1A with 20SOG in 5GP while averaging 27 shifts per game.

Erik Karlsson had 1A which only gives him 3 points in 6GP. He did play over 30 minutes in this one while leading the team with over 4 minutes of PP time. The points will start coming.

Mike Ribeiro fired 7SOG and collected 1G in the process.

Paul Bissonnette with 1 Hit on just over 5 minutes of ice time. This ending his 2 game point streak.

Thanks for joining me this week and feel free to follow me on twitter @Pope604 or the rest of the team over at @TheScouts. Until next week, enjoy this weeks edition of 2 Minutes for Tweeting! 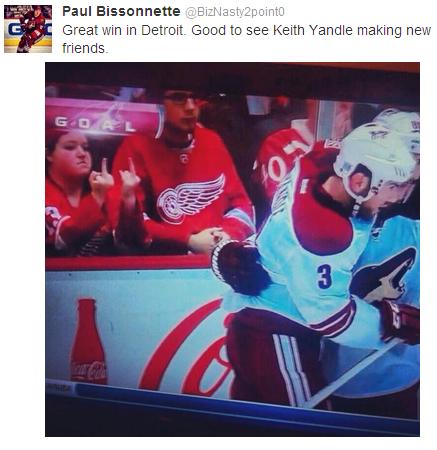 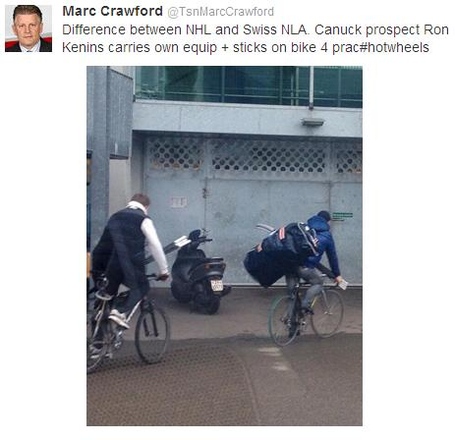 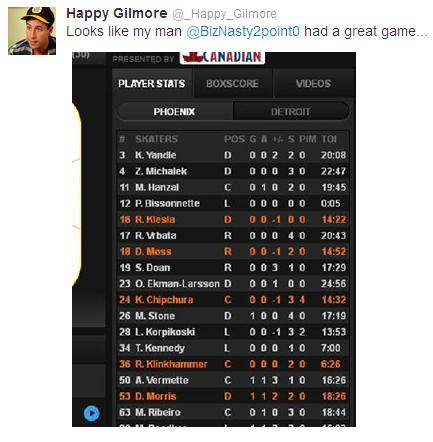 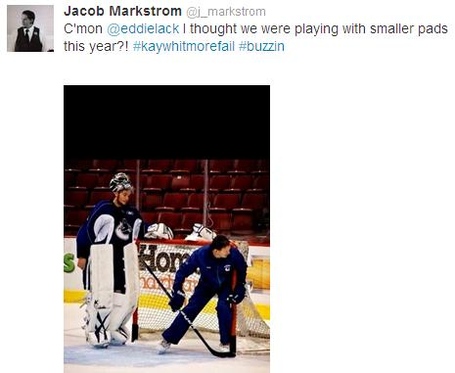