A random collection of thoughts on the NHL with a fantasy hockey slant. Today we'll look at some fantasy options that might be described as less than ideal.

Share All sharing options for: 30 Fantasy Hockey Thoughts - You are useless edition

Here's where I copy an idea which was copied off another (both excellent reads btw) ... but what are you going do? I like lists and I like fantasy hockey so here you go.

Here are 30 thoughts that have made me ask some players "just how are you planning on helping my fantasy team?" 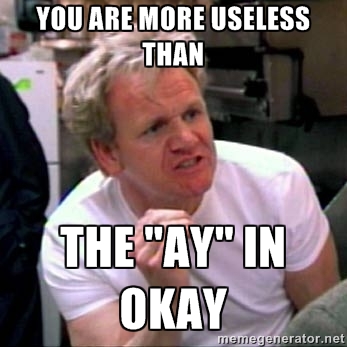 1) I have never owned Tobias Enstrom in any league.  You know why?  Every one of my leagues counts shots.  Last year he had less than a shot a game... the year before he had just 94.  He's owned in 91% of Yahoo! leagues so he won't come cheap and if I'm paying that price I want a bit more than just his (very nice) 40-50 points.

2) In Enstrom's defense he has done a bit better in this department so far this year... 11 shots in eight games.

3) The forward shooting black holes include: Alex Tanguay, Tyler Bozak, Marcus Johansson and David Desharnais.  All should be around 100 shots this year.

5) If you count Blocked Shots you know that picking them up from your d-men is relatively easy... unless you own guys like: Justin Schultz, Keith Yandle, Tyson Barrie, Patrick Wiercioch and Oliver Ekman-Larsson.  Somebody get these guys some shin pads.

6) Matt Moulson has NOT been playing with John Tavares lately.  Here's some math for you: Moulson - Tavares = Useless.   He's playing with Peter Regin and Cal Clutterbuck.

7) Here are the skaters who were on pace for at least 40 points but less than 20 hits (last season prorated to 82 games).  Loui Eriksson, Teemu Selanne, Ray Whitney, Patrick Kane, Teddy Purcell and Ales Hemsky.  Toughen up princesses.

8) Malkin, Hossa, Vanek, Semin, the Sedins and Kessel are also low on the hit board.  If you league counts hits, big hit stars like Stamkos, Ovechkin, Getzlaf and Kunitz sometimes can get relatively undervalued.

10) Speaking of Mason Raymond, I'm curious to see what happens to him when David Clarkson and Nikolai Kumelin come back.

11) There are currently only two dmen with more than a point a game.  P.K. Subban and Mark Giordano.  I wouldn't call Giordano useless  and he won't keep up this pace... but he should be good for close to 40 this season.

12) What makes Claude Giroux's slow start all the more perplexing is he is tied for first in the league in PPTOI (with Subban).

13) Rich Peverley on L1 with Seguin and Benn.  He's some what useless as he's only had one season >42 points  but he's got the potential to pass 50, especially on this line

14) Same deal with Daniel Alfredsson.  He's washed up but if he keeps playing on L1 with Dats and Zetts he gets a lot more interesting.

15) Jeff Skinner is lighting it up so far this year with 8 points on the board.  Only problem is he's been playing with Riley Nash and Radek Dvorak on L3.  Might be a good time to shop him if you can get fair value.

16) So Torts has shaken up the lines in Vancouver.  Ryan Kesler with Henrik Sedin.  Kesler is owned in only 82% of leagues and makes a good trade target as he has only 3 points so far.  Bad news for Daniel Sedin as his new center is Mike Santorelli.  Ugggg.  I can't see these lines lasting though so don't panic.

18) It's early, but who would have thought the great Henrik Lundqvist would be sporting useless numbers of 3.33 gaa and a .902 sv%.  I was tossing up between Lundqvist and Tuukka Rask in one league.  Very glad I went with Rask.

19) So now that Martin Biron is gone does that mean the problems in NY are fixed?  The new backup is some guy named Jason Missiaen.  Ranger fans better hope Lundqvist figures it out quickly.

22) If the Oilers trade Yakupov for a Dubnyk replacement (like James Reimer) they deserve all the loses they get.

23) I would have added Ondrej Pavelec to the list in point 18 (3.00 gaa / .907 sv%) but this is pretty much par for the course for him.  Most overrated and useless fantasy goalie out there, in my opinion.

24) Pavelc is owned 67% of Yahoo! leagues.  Guys lower than him? Evgeni Nabokov, Corey Schneider, Ben Bishop, Steve Mason and then some decent part time options like Victor Fasth, James Reimer, Brian Elliott.  When are owners going to give up on this guy?

25) I guess the better question is when is Winnipeg going to give up on him?  He's signed for $3.9 million until 2016-17 so I'm guessing we'll get to continue to see him stink it up in the Peg for a few more years at least.

26) With Dan Boyle out I like Matt Irwin to pick up some more time on the PP.  Might be worth an add.

27) Hard to believe the Penguins are 7-1 and they've had James Neal and Kris Letang on the sidelines all year.

28) Mike Weber and Ales Hemsky are tied for the league worst -9.  Lots of Rangers are the bottom of the leaderboard as well, which isn't surprising.

30) When Niklas Backstrom comes back from injury do the Wild play him?  Josh Harding has been great.  We could (and probably should) be seeing some type of split happening here.

As always, anything you agree/disagree with add it to the comments.  Have any random thoughts of your own?  Add them too.