A fantasized look at the NHL action from Tuesday night

There were a total of 8 games played last night and there was no shortage of goalie headlines that came out of it. From a couple of key injuries to a battle between Thing #1 and Thing #2 and then another great game from my Breakout Player of the Year candidate I noted to in the FHS Roundtable Predictions. The goalies didn't steal the complete show however as we also had a couple of firsts and a memorable game from Tomas Hertl!!

Patrick Roy and the Colorado Avalanche remained undefeated after 3 games with a 2-1 victory over the Toronto Maple Leafs. It should be no secret that back in the day, Roy was my favorite player growing up. He was always a furious competitor who had, and still does have a short temper that is matched by few. The passion he brings to the game seems to be rubbing off on the Avs so far and we might be witnessing one of the quicker turnarounds for a franchise in recent years. They look good.

Semyon Varlamov is one of the benefactors of the new Roy regime, specifically new goalie coach Francois Allaire, as he is off to an amazing start with 3 wins, 1.00 GAA and .967 SV%. I picked him as my Breakout Player of the Year in the FHS Roundtable Predictions. This after I traded him in a keeper for Jonas Hiller...why? Well, um...yeah I have nothing....

Gabriel Landeskog was back after missing a game with a leg injury. He didn't hit the scoresheet but was robbed by Bernier on one play and still managed to finish with 4 SOG, 3 Hits and 2 Blocks. He is going to be a multi-cat stud for many years to come. Stating the obvious there.

Joffrey Lupul scored a goal and collected 5 SOG and 2 Hits. He did however look uncomfortable after colliding skating backwards and seemed to be nursing the dreaded LBI. He stayed in the game but something worth monitoring for an injury prone player.

Mike Smith got lit up for 5 goals on 20 shots against the New York Islanders. He is a notorious slow starter so I wouldn't be too concerned at this point. Thomas Greiss came in and stopped 5 of 6 shots in a relief effort.

John Tavares scored his first 2 goals of the season while adding 2 PIM, 5 SOG and 1 Hit. Tavares owners have to be happy with this outing and for what's to come from #91.

The second line of Josh Bailey, Frans Nielsen and Michael Grabner combined for 1 Goal, 8 Assists, and a +4 rating while averaging around 15 minutes of ice time. A huge night for that line.

The Flyers did what they were supposed to do. Go out and get a win for their new coach Craig Berube with a 2-1 victory over the Panthers.

Claude Giroux finished with no points on 1 SOG and a -1 rating. But he also had over 20 minutes of ice time and nearly 7 minutes of powerplay time! Hey Claude, that's 4 games now without a point to start the season. You wanna try a different stick, maybe? Please?

Drew Shore finished with just one hit on his stat line. He also only played 9:44 of ice time and was a healthy scratch last game. He should only be on your farm team if you are in a deep league but this is disappointing to see nonetheless.

Tim Thomas left the game early with a groin injury after letting in 2 Goals on 5 Shots. Jacob Markstrom came in and stopped all 25 shots he faced. A great sign for Markstrom owners.

Back to Tim Thomas though for a bit of a rant and a wildly speculative hunch which by no means reflect the thoughts of the rest of the team here on FHS. In his first game, Thomas stopped 25 of 27 shots and looked pretty good. This I believe is due to his first game back after "retirement" and having the adrenaline to make for a good show. Since then however, he has let in 9 Goals on 33 Shots and has now suffered a groin injury. Thomas could very well be done before it even started. Does Thomas still have the competitive instinct in him? For sure he does because all goalies do. That's what they thrive on. But Thomas is a different animal as we all know who beats to his own drum. This is why it wouldn't shock me to see him pull such a move, or at the least prefer to ride the pine. He's also not dumb as he did sign a pretty decent contract with Florida. A nice cushion for when he finally does decide to hang em up for good. So don't freak out Thomas owners, this is just me with one of my wildly crazy hunches that will probably not happen. But I just wanted to throw it out there incase he does so I can at least say told ya so! Ok, time to put the bottle down and move onto the other games...

Jussi Jokinen powered the Penguins to a 5-2 victory over Carolina with a hat trick in this one. He also finished with a +1 rating, 5 SOG and 1 BS. As Darren over at @TMA_Hockey_blog pointed out, that sound you hear is everyone running to their laptop to add Jokinen to their lineup. I expect his production to continue as long as Neal is out of the lineup.

Olli Maatta also had a fantastic game with 2A, +1, 1 SOG and 3 BS. You'll see below in "2 Minutes for Tweeting" that the coach gives him a huge boost of confidence which looks good for his outlook to stick with the Pens this year.

Elias Lindholm had zeroes across the board for his stats with just over 9 minutes of ice time. He is now zero across the board in 3 games with a -3 rating. Is he going to stick with the club? He isn't playing like he wants to.

Radko Gudas, for those in multi-cat leagues finished with 9PIM, 2 Hits and 2 Blocks.

Steven Stamkos is still without a goal after 3 games but finished with 3 SOG, 1 Hit and 1 Block. It is just a matter of time before they start going in.

Jamie McBain with 1G, 1A, 1SOG, 1 Hit and 1 Block with over 21 minutes of ice time. He is getting the opportunities now that he is out of Carolina as he also had over 4 minutes of PP time.

Cody Hodgson also had 1G and 1A and added 6 SOG for the night.

Jhonas Enroth played in this one stopping 31-34 shots. Ryan Miller sat out this game with a LBI but is expected back for Thursday's game against Columbus.

Filip Forsberg scored his 1st career goal against Minnesota in a 3-2 win. He also added 2PIM, 1SOG and 2 Hits in over 15 minutes of ice time. Meanwhile in Washington, Martin Erat is averaging 8 minutes of ice time while playing on the 4th line. Remind me again why the Caps made this trade? What did they think they were getting in Erat?

Speaking of firsts, Seth Jones recorded his 1st career assist and added 2PIM, 2SOG, and 2 Blocks. Oh yeah, he also played over 25 minutes in this one.

Niklas Backstrom left this game in the first period with the dreaded LBI. No word on the severity but Josh Harding came in to replace him and stopped 19-20 the rest of the way. That lone goal was a penalty shot when he came in to relieve the injured Backstrom. Not the best way to enter the game but a solid effort nonetheless.

Roberto Luongo vs Cory Schneider in the much anticipated matchup between them ever since the trade during last years draft that sent Schneids to New Jersey for what turned out to be Bo Horvat. I was watching the draft while sitting in a bar drinking a cold one with Cam when this trade went down and I was in shock as everyone else was. Ever since then all the talk and hype was about when the two teams would be playing each other. Well, it finally happened and what a dual it was. The two are actually really good friends evident by a tweet I posted for you below. But Luongo won round one here as the Canucks best the Devils 3-2 in OT. Schneider finished 29-32 and Luongo finished 21-23, although they both made some spectacular saves in this game. Good job guys..looking forward to the next rematch.

Jaromir Jagr also had 1G and 1A along with a +2 rating and 2 SOG. I wouldn't own Jagr in any league though. Just not worth the risk IMO.

Jason Garrison scored the OT winner in this one while finishing with 3 SOG, 1 Hit and 1 Block. Garrison is off to a great start to the season as well as he now has 3G and 2A in 4GP. Add to that 12 SOG, 2 Hits and 8 Blocks and averaging over 22 minutes of ice time, including a heavy dose of PP time.

Daniel Sedin had 1G and 1A to go with a +2 rating and 4 shots. More on the Sedins below.

San Jose Sharks. They have come out flying and have won their first 3 games without even breaking a sweat. That is no more evident then the number they put on the Rangers last night beating them down 9-2.

Among the Sharks with 3 points here was Jason Demers, Joe Pavelski and Matthew Nieto. Brent Burns on the other hand managed a big zero on just 11 minutes of ice time. I didn't see the game but what was with the low ice time?

Rick Nash left this game after receiving a hit to the head. He didn't look good and was later quoted saying "I have a headache. It got worse. It was a head shot. I'm concerned the way it feels". Not good news, especially for someone who missed games last year with concussion symptoms.

For our Canadian readers, enjoy the Thanksgiving long weekend! Feel free to follow me on twitter @Pope604 or the rest of the team @TheScouts. Thanks for reading and until next week, enjoy this weeks edition of "2 Minutes for Tweeting" 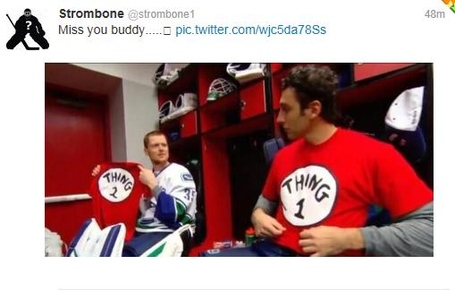 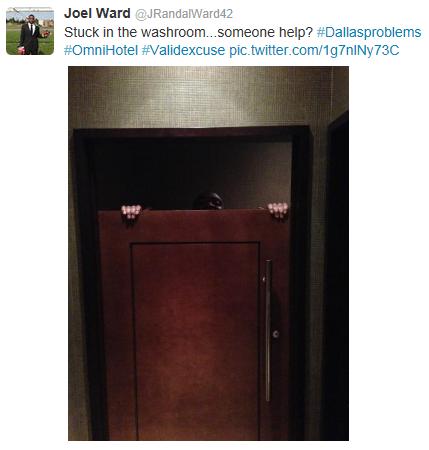