What a busy night with 11 games on the go. There was a lot to cover so I will do my best to point out any streaks or trends you should know about for your fantasy league as well as mention any other stats I notice worth mentioning. If I miss anything, feel free to mention it below in the comments section.

I was going to bring up some goaltending clinics tonight but this about sums it up...

The Kings outshot the Sabres here 30-7 after 2 periods however Ryan Miller stood on his head again stopping 43-45 as the Sabres have finally won their first game on home ice after 10 tries. As @DobberHockey pointed out, Miller has now faced 45 or more shots in 3 of his last 4 games.

Cody Hodgson with 2G and 4SOG on the night. He now has 15 points in 20GP this year

Matt Moulson added 2A to give him 2G and 6A in 7GP since being traded to the Sabres and 17 points in 18GP on the year.

Steve Ott with a massive 10 Hits on the night while also chipping in with 1A, +1, 2PIM and 2BS. A good night for Ott owners.

Tyler Toffoli with 1A which now extends his point streak to 4 games since being called up. So give him 2G and 4A over that span. He also saw nearly 4 minutes of PP time on the night.

Mike Richards extended his point streak to 5 games, including 8 of his last 9 games with 1A here. He now has 17 points in 18GP and also chipped in with 6 SOG.

Jonathan Quick left this game in OT with a LBI. There were no details provided after the game but it did not look good. I will try to dig something up in time for Wednesday's Injury Update.

Hampus Lindholm scored here on a perfect shot past Tim Thomas and also added 2PIM, 4SOG and 1BS. Still only 19 years of age, Lindholm sports an amazing +14 for a rookie Dman and he has been looking better every game. He is getting the ice time as well averaging around 19 minutes a night, including some PP time.

Andrew Cogliano with 1G to extend his point streak to 4 games. He also added 3SOG

Frederik Andersen is human after all! He ran off 6 straight wins to start his career before taking his first loss here stopping 22-25. With Hiller ready to go and Fasth getting some conditioning time, I expect to see Andersen sent back down by the end of the week. With his impressive showing however, he might give Ducks management the confidence in him they needed to make a move with Hiller sooner rather then later.

Brad Boyes with a team leading 6th goal of the season here ending a 5 game pointless streak. He also had 4SOG.

Tim Thomas with his first win since October 9th stopping 32-34 and halting the Panthers 9 game losing streak at the same time. His updated stats are 3.08GAA and .905SV% after 9GP.

No Stamkos, no problem as the lightning fired 45 shots on goal including 6 by Teddy Purcell and 5 by Victor Hedman. But it was Ryan Malone scoring the lone goal in regulation here while adding 3SOG and 2 Hits on just over 10 minutes TOI.

Martin St. Louis mustered just 1SOG in the first game without Stamkos and Filppula managed 4SOG. Both ended up tied with the most PP time with over 5 minutes here followed by Purcell for the forwards.

Daniel Briere with 1G after missing 10 games with a concussion.

Brian Gionta had 6SOG but was held without a point which is 3 games in a row now.

P.K. Subban fired 8SOG while adding 1 Hit and 3BS. He lead all Canadiens with over 28 minutes TOI but also had his 5 game point streak come to an end.

Carey Price with a goaltending clinic stopping 44-45 to improve his numbers to 2.12GAA and .933SV% in the loss.

Frans Nielsen with 2A and over 7 minutes of PP time to lead all Islanders. He now has 9G and 12A in 19GP. Seriously, stop trying to prove all of us doubters wrong already!

Marek Mazanec started his first career game here stopping 30-33. Not a terrible outing by Mazanec but considering his team came into this game having been shutout the last 2 games, he was going to need a perfect game. It was a good effort.

Patric Hornqvist with 1G to put an end to his 3 game drought. He had 6SOG while adding 2SOG and 2 Hits.

Seth Jones saw over 4 minutes of SH TOI and as a result, had 6BS on the night.

Martin Brodeur came into this one with back to back shutouts but Marc Staal scored to end his shutout streak at 192 minutes. Brodeur went on to stop 33-35 for the win and afterwards, I listened as some columnists said he is the clear cut #1 guy here on out. I'm not saying Brodeur doesn't still have it, but having watched Schneider for many years, I'm pretty sure he hasn't given up the net. This is a battle that is likely to go back and forth all year long.

Ryan Carter with 2G here, his first goals of the year. Chalk it up to a one off....or two off if you will...

Dainius Zubrus with points in B2B games now with 1G here. He also was a +1, with 2SOG, 2 Hits and 2BS. A decent night for his owners.

Travis Zajac with 1A who also has points in B2B games now. He also led all Devils forwards with just over 20 minutes TOI.

Marc Staal broke Brodeurs shutout streak with 1G which is his first since the season opener.

Ryan Callahan was held pointless for the second straight game but did have 3SOG and 7 Hits on the night.

Mats Zuccarello extended his points streak to 4 games and 8 of the last 10 with 1A.

Alex Ovechkin scored the OT winner to tie Steen and Stamkkos with the league lead in goals with 14. He also added 6SOG and 1 Hit. Ovechkin now has a league leading 100SOG in just 17GP. That's an average of 5.88 shots per game which puts him on pace for 482SOG. That's 4-8-2.

Nicklas Backstrom was held pointless for the third consecutive game.

Mikhail Grabovski now has points in B2B games adding 1G and 1A.

Joel Ward with goals in 3 straight games as he added one here as well.

Brandon Dubinsky had 1G and 1A and now has 7 points in his last 4GP.

Marian Gaborik did not register a point on 4SOG and now has just 1A in his last 7GP.

Cam Atkinson with a goal in B2B games now and he also fired 4SOG.

Gabriel Landeskog notching 1A but also contributing with 7 Hits in this one.

Jordan Staal with 1G and 1A despite no PP time.

Patrick Dwyer with 1G and 1A but this is just a blip.

Eric Staal was held without a point which has happened 7 of the last 8 games now. Buy low if you can as he usually turns it on later in the season. Let's look at some others in the same boat...

Alexander Semin, pointless here and held without a point in 5 of the last 6 games.

Justin Faulk pointless in the last 9 of 10 games.

But wait a minute, Carolina won this game and against the Avs of all teams. So what's going on?

Craig Anderson in his first game back since his neck sprain should have rested at least one more game. Prior to this outing he has allowed 14 goals in his last 3 starts. He got lit up here again allowing 5 goals to the Flyers on 31 shots.

It was an ugly game all around for the Senators so unless your league counts hits, you probably don't mind me skipping their individual stats. Jared Cowen and Colin Greening each had 6 Hits btw.

Steve Mason registered his first shutout as a Flyer stopping all 24 shots he faced. He has now posted B2B wins and has a 2.15GAA and .930SV%

Jakub Voracek with 2G to give him points in B2B games now as he was back on the top line with Giroux and Hartnell.

Scott Hartnell ended his 38 game drought without an assist with one here. He also fired 6SOG.

Claude Giroux with 2A to go with 4SOG.

Steve Downie was back and registered 1A on over 16 minutes TOI and just over a minute of PP time. He lined up on L3 with Couturier (1A) and Read(1G).

Ondrej Pavelec with his third straight victory stopping 41-43 which also helped the Jets to their first 3 game win streak of the year.

Zach Bogosian ended his 8 game pointless streak with 1G and also added 4 Hits on the night. He also had the most ice time of all Jets with nearly 28 minutes TOI.

Andrew Ladd scored in the shootout to stay perfect this year going 5 for 5 so far.

Pavel Datsyuk with 2G on 4SOG. How many regular season hat tricks has Datsyuk scored in his career? Yeah you guessed it, zero. Unreal.

Henrik Zetterberg notched 1A here and now has points in 6 straight games with 9 points over that span.

Mikael Samuelsson with no points and 5SOG on just under 10 minutes TOI on L3. He has just 1G in 7GP. Considering the limited amount of ice time he is getting and the fact he is turning 38 in December, is he done? Regardless, he shouldn't be on your team. I just like to point these out from time to time.

Johan Franzen was back after missing some time and registered 1A but was also a -2 while adding 4SOG and 3 Hits.

Mike Cammalleri with 1G to extend his point streak to 3 games and he now has 11 points in 11GP.

Chris Butler with 1A and 8BS last night. For those in leagues that count blocked shots, he now has 48 in 18GP.

Patrick Marleau with 1G and 1A to go with +1 and 3SOG. Give him points in B2B after going 3 games without a point.

Alex Stalock in only his second career start for the Sharks faced only 13 shots, stopping 11 of them. Hey, a win is a win right?

That's all I have for you from last night's games. If there is something I missed, please let me know in the comments section below.

Enjoy this weeks edition of... 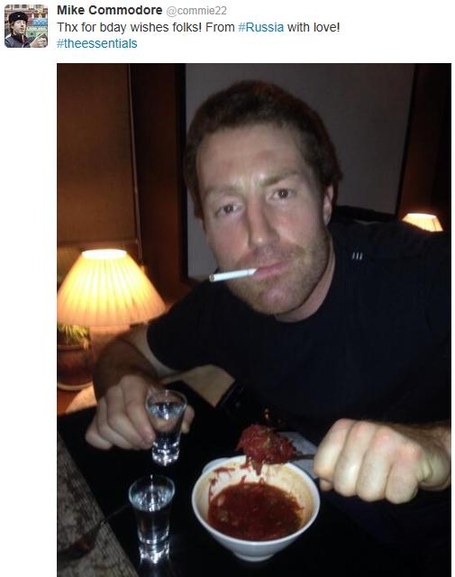 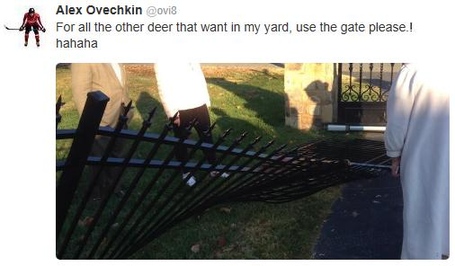 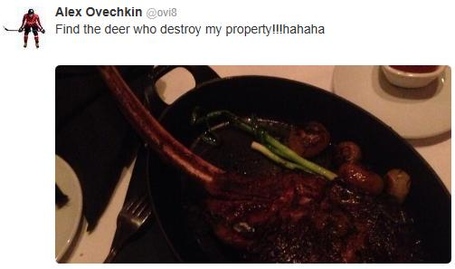 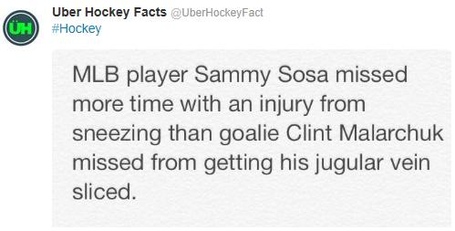 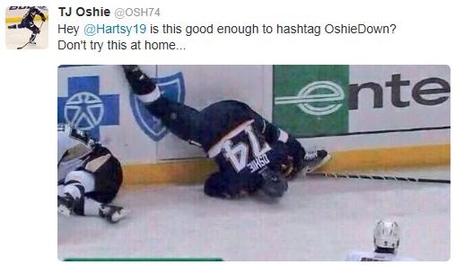 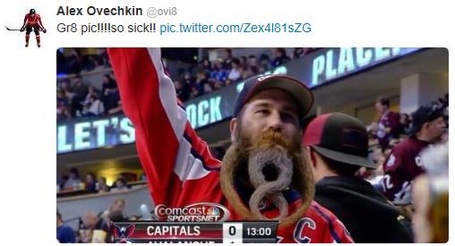 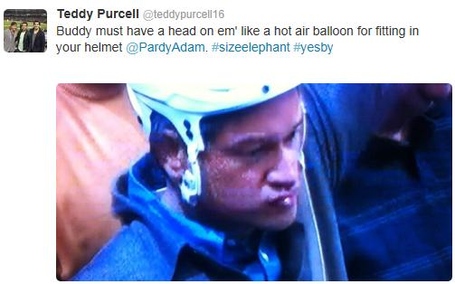 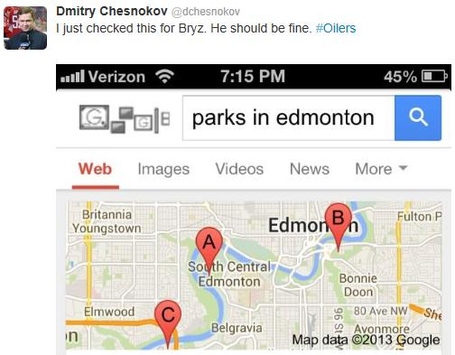