I just happen to have some time away from my day job so I decided to invest all of this new found free time into today's dosage by adding more details then usual. And with 9 games on tilt last night, there was plenty of action to cover from a fantasy hockey perspective around the NHL. So enjoy the recap from yesterday's action and this week's addition of 2 Minutes for Tweeting.

Valeri Nichushkin skated on the top line here assisting on a Jamie Benn goal. Nichushkin finished with 1A, +1 with 4SOG and 1 Hit. He has been picking it up lately so perhaps he read my dosage last week about playing in his own end first? Over 18 minutes TOI to go with almost 3 minutes on the PP.

Patrice Bergeron with no points on 7SOG.

Bobby Ryan with 1A to extend his point streak to 4 games with 6 points over that span. He was a +2 while adding 2 SOG and 3BS.

Robin Lehner stopped 32-33 for the win and 1st star recognition.

Alex Ovechkin in his first game back from injury with 2G and 1A, including 4SOG and 2 Hits.

Martin Erat by the way skated on the top line and was held pointless. Not sure how long he stayed there but I am guessing not very long at all.

Tom Wilson with his first points of his career with 1G and 1A and a +1 rating. He also added 12PIM (6th best), 4SOG and 1 Hit on 10 minutes TOI. Future multi-cat beast now he just needs more ice time.

Scott Hartnell with his first of the year scoring 1G while adding 3SOG, 3 Hits and 1BS. By the way, as noted in a tweet below from the other day, that is now 35 games without an assist for Hartnell.

A feel good story here as Manny Malhotra was rewarded with a one year contract by the Canes and it didn't take long for that to pay off as he scored the GWG in OT. Manny is more known for his faceoff dominance but what a great feeling this must've been for him to pot the winner in OT for the team who was willing to take a chance on him.

Jordan Staal with 1G which is just his second of the year. Buy low candidate or....?

Justin Peters stopped 28-29 for the win. A good opportunity for him to showcase his stuff.

Mark Arcobello and Taylor Fedun each with their first career goals in this one. Arcobello actually had 2G while Fedun scored in his first career game since returning from that leg injury 2 years ago.

Boyd Gordon the assist machine with 3A here on nearly 15 minutes TOI.

Jacob Markstrom stopped 23-27 for the loss. The hype is real, but it looks like it will take some time to see why there has been so much hype on Markstrom. Look at the talent Florida has and if you like, let's compare them to the Oilers for a moment. Both are in similar situations as far as the direction of their respective teams, but if you had to draft today in a keeper, would you take Dubnyk or Markstrom? Markstrom for me please.

As reported by @tsnjamesduthie Montreal blocked an NHL record 38 shots in this one. So for those in leagues that count them, this block is for you.

Josh Harding with another great outing stopping 24-25. His updated numbers through 12GP are 1.09GAA (1st in league) and .951SV% (1st in league). I've seen a lot of chatter of how Harding has taken over as the #1 guy but I am not buying it despite these great numbers. It is a great feel good story with his success early on but I think Backstrom is still the guy. They will just share more of the starts down the stretch I think and let's not forget Backstrom was signed to a 3 year extension making over 11 million I think? Don't write him off. Buy low.

Tim Jackman, for those in leagues that count PIMs finished with 17PIM, 3SOG, 2 Hits and 1 Block

Radim Vrbata scored on the first shot of the game here. He finished with 3SOG, 1 Hit and 1 BS. He now has 6G and 7A for 13 points in 16GP. This guy, at least in one of my keepers, is always a solid contributor but can never make the roster on cut down day. Probably the least deserving of waiver fodder each summer.

A second straight mention from me for Rob Klinkhammer! A massive 8 Hits on the night.

Mike Smith stopped 31-33 for the win as both goalies looked great in this game. He needed the help of the posts twice in the shootout to preserve the victory.

Mike Santorelli with 1A on over 22 minutes TOI. He has the confidence of the coach and with that comes the ice time.

Ryan Miller with an unbelievable game stopping 47-51 for the shootout win, which now ties him with Henrik Lundqvist for the most shootout wins in NHL history (45 as per @SabresPR). That is just his second win of the year but don't blame him as he has been playing fantastic for the most part. He won't help you with Wins or GAA but his .919SV% (14th best) is respectable. To quote Don Cherry from many years ago "He is seeing more rubber than a dead skunk on the Trans Canada Highway". Miller's 456 shots against in 12GP ranks him 3rd in the league.

Drew Stafford with 1G and 1A, +1, 4SOG and 1 Hit. Where is Stafford playing? How about almost 5 minutes SH TOI while only :30 seconds of PP TOI.

Marty Havlat had his firsts of the year here in his 3rd game back with 1G and 1A, while finishing +1 with 2SOG.

Tommy Wingels with 1G to extend his point streak to 4 games. He was a +2 with 3SOG and 3 Hits.

Until next week, enjoy this week's edition of.... 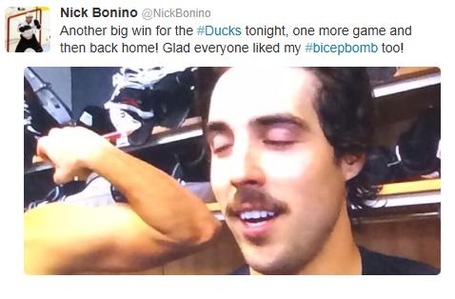 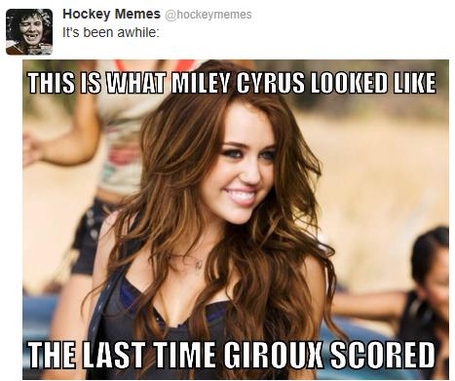 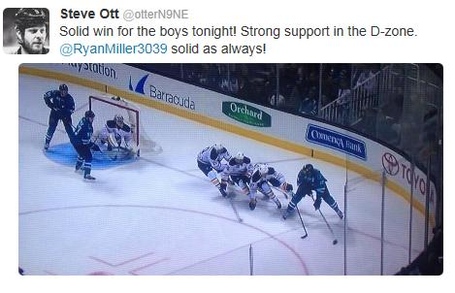 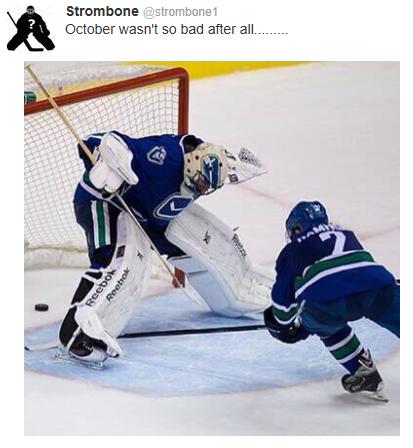 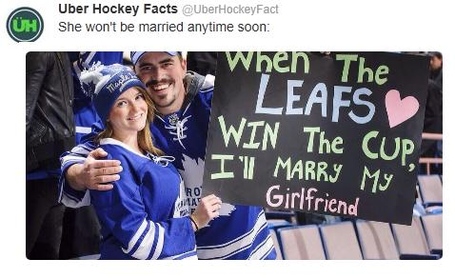 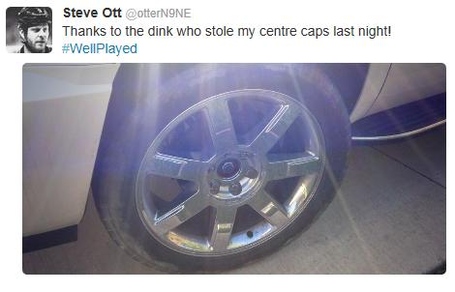 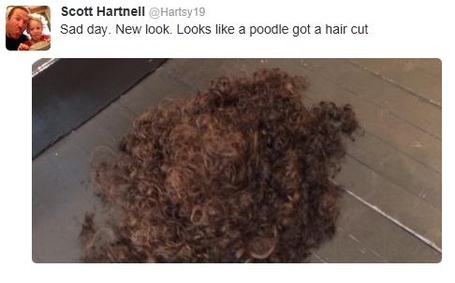 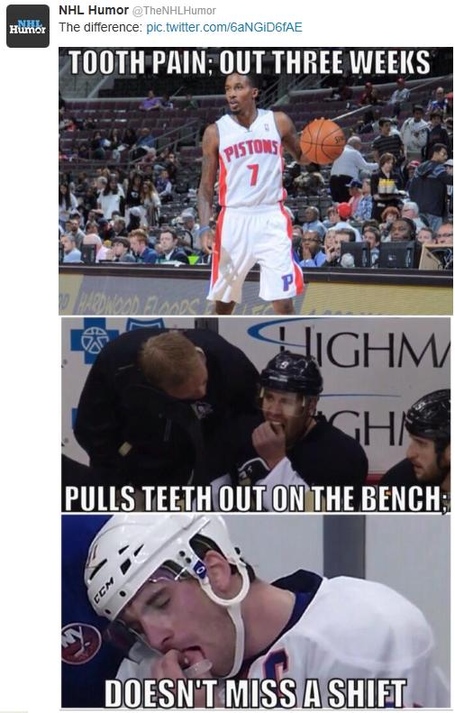 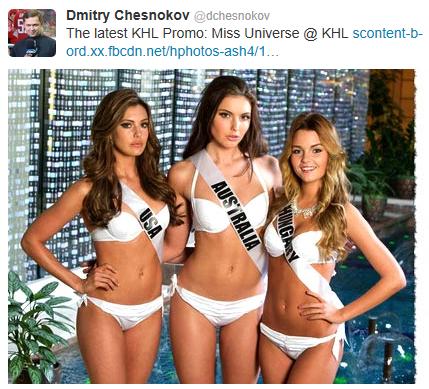