We're almost half way through this shortened season so it's a perfect time to stop and see which players have surprised us (both good and bad) this season.

Yeah sure I'm copying an idea which was copied off another with this post (both excellent reads btw) ... but what are you going do? I like lists and I like fantasy hockey so here you go.

Here are thirty thoughts that have made me question if this is real life so far this season.... 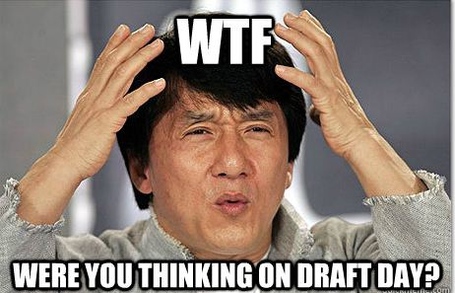 2) Chris Kunitz. This is a guy we projected for 58 points but is on pace for 112. Yeah almost doubling our numbers. His highest ppg coming into this year was .74... he's at 1.37 now. Absolute insanity. Add in nearly 200 shots (& hits), over 40 PIM's and his PPP numbers and you've one of the most valuable mid rounds picks in fantasy history.

3) Thomas Vanek's pace of 103 points is incredible since he's coming off a 61 pointer last year. He's slowing down a bit though (only five points in last nine).

4) Ryan Getzlaf and Martin St. Louis are sporting career best PPG's... weren't their best years supposed to be behind them?

5) Sidney Crosby is on pace for an incredible 137 points. Nobody has picked up that many points in a season since Jagr and Mario did it in 1995-96.

10) I don't know who Antoine Roussel is either. (He plays for Dallas apparently).

12) Jiri Tlusty is on pace for 69 points. He'll likely get a career high in points in half a season. What's even more impressive is he's got 21 points over his last 19 games. Wow.

13) Jonathan Quick (2.60, .894) is looking very mortal. Jonathan Bernier (.193, .916) has been lights out. I've been predicting Bernier to outperform Quick for about four years, but gave up on Bernier before the start of this season. Sigh.

14) In terms of points per game, P.K. Subban is third amongst d-men, playing at a 74 point pace. Tons of shots, hits, blocks and a bunch of PPP (13). He has arrived to stud territory.

15) Speaking of ridiculous power play numbers Andrei Markov has 15 of his 17 points on the man advantage, good for 1st (tied) in the league. Stay healthy buddy.

16) The two guys tied with Markov are Sidney Crosby (of course) and surprisingly Mike Ribeiro. He's on the pace for 92 pts, 112 PIMs, 49 PPPs, and over 100 hits. He doesn't shoot much but that's a pretty damn nice return for where you drafted him.

17) Jaroslav Halak (.881 sv%) and Brian Elliott (.851) have ruined a few fantasy seasons I am sure. Let's hold a moment of silence for the fantasy players out there who decided it would be a good strategy to draft both STL goalies this season. Seemed like a good idea at the time I bet.

18) Do you realize how good Wayne Simmonds is? He's getting a wack of PPTOI and has translated it to a 65 point/188 PIM season pace so far.

21) Kudos to those of you who took the risk that is Alexander Semin. Not only is he on pace for 89 points but also a plus-62!

22) Sami Salo has only missed two games this season. He's on borrowed time.

23) How the hell is Francois Beauchemin nearly tripling his pace from last year? His 52 point pace is easily the best of his career. Lots of hits & blocks, a decent amount of shots and a big plus so far too. Did not see that coming.

24) Matt Duchene (on pace for 89 points) has to be the comeback player of the year, no?

25) Do you know who leads the league in shots? Alex Ovechkin is the incorrect answer. It's actually multi-cat stud Evander Kane. In addition to the 366 shot pace he would also be tracking towards 63 points, 98 PIM's and a whopping 240 hits.

28) Joe Vitale, Scott Nichol and Rich Peverley have the top three FO% (more than 150 chances) in the league. They have a combined total of 11 points combined in 68 games. Just sayin' again.

29) Jeff Carter, who has a 17 goals and 2 assists, has a great shot at the Cy Young Award this year.

30) Who's the biggest surprise in the pipes? Sergei Bobrovsky, Craig Anderson, Corey Crawford or Viktor Fasth? They make up four of the top eight in both gaa and sv%. I'm voting for Bobs. Columbus with a good goalie? Does not compute.

Any thing that made you say WTF? Vent away in the comments.