In my previous article, the summary of picks one through five are

As we move on in the NHL Draft, this is where the draft begins to get more interesting. The talent begins to cluster, as the rankings are a relative crap-shoot from 6 through to about 35. Anybody can go anywhere depending on a teams' personal opinion on a player.

Without further interruption, I'll continue with the mock draft. 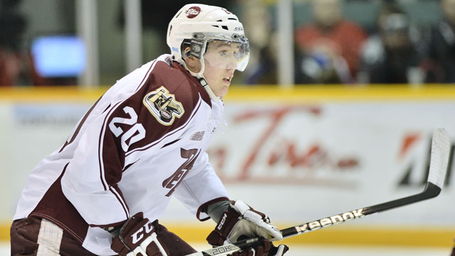 The Canucks are really in a tough spot with center Ryan Kesler demanding a trade, even after the changes made at Team President (Trevor Linden), General Manager (Jim Benning), and Head Coach (still unnamed). I have a feeling the Canucks may try to land North Vancouver native Sam Reinhart in the draft, possibly dangling Kesler as a centerpiece in acquiring a top three pick.

The most likely landing spot out of the top three for Kesler may be Florida, but that's just speculation on my part.

If the Canucks do pick at six, they'll likely choose a player like Nick Ritchie or Jake Virtanen. I believe based on size and skill, the Canucks will elect to take Ritchie over Virtanen.

At 6'3" and over 230 pounds, Ritchie is one of the bigger forwards in this draft class. His older brother Brett Ritchie has been drafted by the Dallas Stars and is enjoying his time playing in the Calder Cup in the AHL with the Texas Stars.

For his size, he's regarded as a very good skater. His size allows him to be a beast on the boards and in front of the goal. His hands though really separate him from others in his draft class. His combination of size, speed, skill, and strength land Ritchie at number six.

Fantasy Impact: In his prime, I expect Ritchie to be a 35-goal scorer taken in the first 8 rounds of a standard 12-team draft. 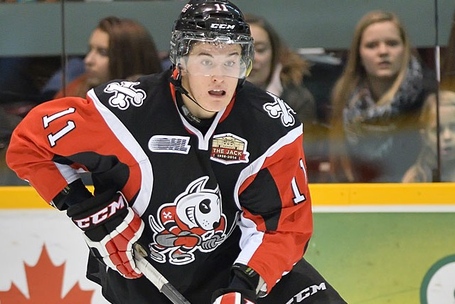 With GM Jim Rutherford now gone, the Hurricanes hope that the regime change may bring with it some more success in the future. Sad fact is the team is loaded up the middle with brothers Eric and Jordan Staal, as well as sophomore Elias Lindholm. The real hole in the club still remains on the wing and on defence.

The Canes might be losing defenseman Ron Hainsey and Joni Pitkanen this offseason, so the need for a defenceman might be there, however, like I've always said, you should always draft based on the best player available and not for need.

Instead of picking a defenceman possibly too soon, the Canes decide to go with size up front with Brendan Perlini.

Voted the most-improved player this year in the OHL playing next to current Leafs draft pick Carter Verhaeghe, Perlini combines a good skill set with exceptional speed. At over 6'2" and 210 pounds Perlini projects as a top two line winger.

Armed with an NHL ready shot, Perlini is poised to impact the NHL once he manages to make a team out of camp. Son of former Leaf Fred Perlini who was taken 8th overall by the team back in 1980, Perlini definitely has the bloodlines that lend itself nicely to being an impact player in the NHL.

With only two players over 6'2" on the Canes forward group (Eric and Jordan Staal), are the Canes opting to choose size over the best player available? That's a negative, as Perlini has routinely been ranked in the top eight in most mock drafts and rankings for months now.

Fantasy Impact: I expect Perlini to improve defensively to become a nice 30 goal candidate in the NHL with solid +/- numbers. I see him taken in the first 8 rounds of a standard 12-team draft. 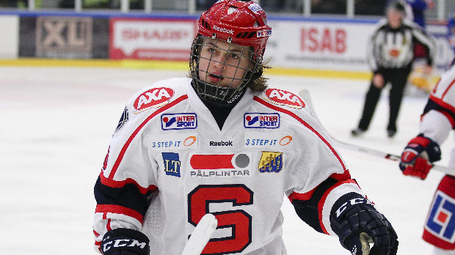 The Leafs are in a tough spot here as the team really could use some more size up front or another defenceman. The Leafs turn around though and take a smaller player, but likely the best player available.

Nylander has some of the best puck skills in the Draft. Elusive skating ability and a set of hands only God's are born with.

One of the most hyped prospects out of Sweden since the Sedin twins, Nylander is still a long ways away from making an impact on an NHL team. His lack of strength right now will likely mean Nylander players another year or two in Europe before coming over.

His game actually is very similar to Nazem Kadri's as both are wonderful skaters, possess great hands, a great passing game, but questions will always remain about their size, ability to play the center position, and of course their abilities to play defensively.

"William exudes confidence when he plays. Exceptional poise with the puck and is always looking to make threatening plays in the offensive zone. Excellent skater who is very difficult to check because of his agility and because he is always changing pace. Can make pinpoint passes in traffic and if you are his line mate, best be ready, as he will provide opportunities. Top line type player."

This kid is a game-breaker though. Like Button says, he's elusive, agile, and a slick skater. His ability to change pace and find the open player in traffic will likely land him in a top-line role down the road. However, his boom or bust potential has a lot of teams questioning whether they take that risk, electing to take a safer, easier to project player instead.

Fantasy Impact: I expect Nylander to grow into a potential top 30 player in the NHL. His abilities are second to none and if he stays healthy I expect big things out of Nylander in his career. 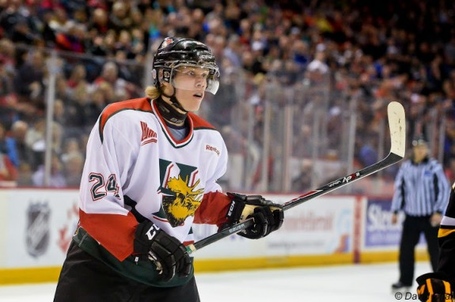 Ehlers, a native of Denmark will look to become the highest draft Danish player of all-time in the Draft. Unfortunately, he'll have to settle for second behind Mikkel Boedker, who was also eighth overall in 2008 by the Phoenix Coyotes.

One of the best skaters in the draft, Ehlers makes plays at high speeds, often found burning the opposition defenceman on the off-wing.

The biggest knock against Ehlers will likely be his lack of size at only 6'0 tall and weighing 160 pounds. That shouldn't stop the Jets from taking him though.

Armed with big, tough forwards such as Andrew Ladd, Blake Wheeler, Evander Kane, and Mark Scheifele, the Jets could use an elusive, small, skilled player to help compliment their roster.

This past season with the Mooseheads, Ehlers finished the season with 49 goals and 55 assists for 104 points in 63 games. In 16 playoff games, Ehlers scored 11 goals and added 17 assists for 28 points. He's definitely a scorer, and a darn good one at that.

If there was one word to describe Ehlers game its ELECTRIC. A bonafide ticket seller, Ehlers will undoubtedly be a must-see player for years to come.

Fantasy Impact: I expect to lie in the middle. I feel he'll likely have a few 30 goal seasons, but in reality, he'll likely be a solid second line player. If he manages to meet his lofty expectations, I can see him being like Patrick Kane one day, a player taken in the first three rounds of any NHL standard draft. 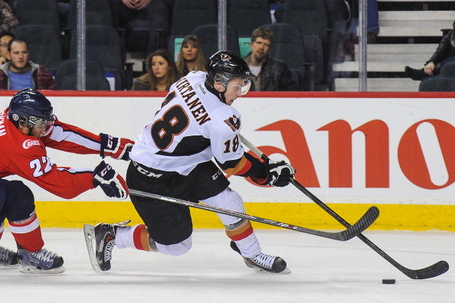 With the loss of Teemu Selanne to retirement, and the relative unknown status of Jakub Silfverberg, the centerpiece of the Bobby Ryan deal, the Ducks decide to take winger Jake Virtanen, again, the best player likely left on the draft boards.

His style of game fits in perfectly next to Corey Perry and Ryan Getzlaf. He's tough, loves to get in the corners and fight for the puck, but best of all, he goes into the dirty areas and fishes out pucks. Those efforts usually result in fistfuls of scoring chances for Virtanen, the former top overall draft pick in the Western Hockey League out of bantam.

His best feature may be his skating, as he won the best skater in the CHL Top Prospects game in both forwards and backwards skating. Virtanen is a true three zone player, as he's a good back-checker and uses his speed and size to impose his will on the opposition.

Fantasy Impact: Virtanen is one of those can't miss prospects who may go unpicked for awhile for whatever reason. Like Zach Parise in 2003, Virtanen will likely fall a little bit, but I don't expect him to fall past the Ducks. He has the potential to be a 30 goal, 30 assist, 80+ PIM monster. Players like this are picked high in standard drafts.